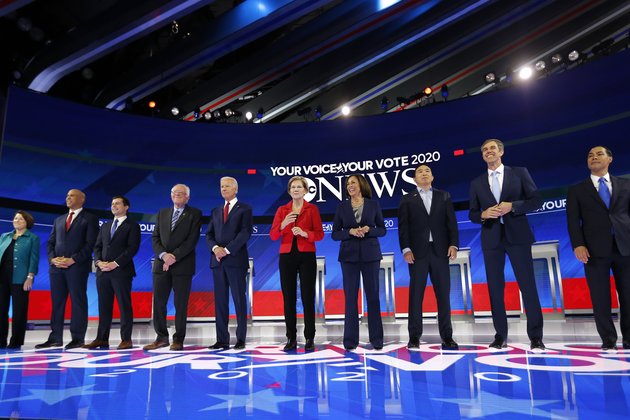 The 10 leading U.S. Democratic presidential candidates squared off in a spirited debate Thursday night, trading political jabs with each other on an array of issues, but also assailing the man they want to oust from the White House in the 2020 election, Republican President Donald Trump.

California Senator Kamala Harris accused Trump of engaging in "hate, intimidation and fear" and telling 12,000 lies during his 2½-year presidency.

She said the only reason Trump has not been indicted for obstructing the investigation into his 2016 campaign's links with Russia was because a Justice Department policy "says a sitting president cannot be charged with a crime."

"The American people are so much better," she declared.

Former Texas Congressman Beto O'Rourke said a gunman in his hometown of El Paso, Texas, who targeted Mexicans, killing 22 people in early August, was "inspired to kill by our president" because of his campaign against migrants trying to enter the country through the southern border with Mexico.

Senator Amy Klobuchar of Minnesota said Trump "would rather lie than lead."

"There's enormous opportunity once we get rid of Donald Trump," he said.

Sanders called Trump "the most dangerous president in the history of this country."

Once again, health care reform dominated the three-hour nationally televised debate in the early going. At the outset, Biden, Warren and Sanders heatedly argued over how to change U.S. health care policies.

Thursday's debate was the first time that Biden and Warren were on the same debate stage, standing virtually at arm's length with each other at adjacent podiums. But except for the health care skirmish, they sparred infrequently.

Meanwhile, Biden supports more incremental changes to improve the national health policies adopted when he was Obama's No. 2. The health care plan, popularly known as Obamacare, added tens of millions of people, but not everyone, to health insurance rolls to help them pay their medical bills.

Biden contended that neither Sanders nor Warren would be able to finance their health policy changes.

Warren responded, "With Medicare for All, costs are going to go down."

Sanders declared, "We're going to stand up to the greed and corruption of the pharmaceuticals."

But Senator Klobuchar said Sanders' government-run program would be a step too far.

"While Bernie wrote the bill, I read the bill," Klobuchar said. She said tens of millions would lose their private health insurance. "I don't think that's a bold idea; I think that's a bad idea."

Former U.S. housing chief Julian Castro, who is lagging in the polls, waged the most aggressive effort to try to bring Biden down a peg, at one time renewing the criticism that he has a faulty memory because of his advanced age, 76, and then lashing out at him for taking credit for all the positive Obama administration policies but ducking responsibility for the bad.

In the heat of the debate over health care, Biden, in describing the public portion of his health care initiative, said, "If you want Medicare, if you lose the job from your employer, you can automatically buy in to this."

Later, when Biden tried to skirt a question about whether he regretted supporting the Obama administration immigration policies that led to massive deportation of illegal immigrants, Castro said, "He wants to take credit for Obama's work, but doesn't want to answer any questions."

Castro's attacks against Biden were reminiscent of those of Congressman Eric Swalwell of California, who called for Biden to pass the torch of leadership to a younger generation during a debate shortly before he dropped out of the Democratic presidential race.

Several of the Democrats attacked Trump's ongoing tit-for-tat tariff war with China, while at the same time fighting over trading rights with European allies.

Senator Cory Booker of New Jersey said: "Donald Trump's America First policy is actually an America alone policy. This is a president who has better relations with dictators rather than American allies."

The three-hour debate in Houston, Texas, was the third in a planned series of debates extending into 2020, but the first since late July.

Democratic Party presidential nominating contests start in February with almost weekly elections and caucuses designed to winnow the crowded field, leading to the selection of an eventual nominee by next summer to face Trump in the Nov. 3, 2020, election.

Republicans made their presence known outside the debate, flying a large banner, playing off a Republican claim that the Democratic candidates are socialists. "Socialism will kill Houston's economy. Vote Trump 2020," the banner said.

Trump, as he headed to Baltimore, Maryland, for a political speech, predicted that the Democratic nomination contest would come down to Biden, Massachusetts Senator Warren and Vermont Senator Sanders "because they are so far in the lead, the three of them."

Biden, for 36 years a U.S. senator and twice a losing presidential contender, is leading with about 30% support in national polls of Democrats. Warren and Sanders are virtually tied in most polling, about 10 points or so behind Biden nationally, but closer or even ahead of Biden in some early-voting states. No other candidates are registering above single digits in national polling.

Polls show Warren, a former Harvard law professor, and Sanders, a self-described democratic socialist, are Biden's main current challengers, with the seven other contenders on the debate stage trailing far behind in national polling.

All 10, however, have fared better in polling and campaign donations than still another 10 candidates who did not meet Democratic Party requirements to appear at Thursday's debate.

Biden's selection as the Democratic nominee to face Trump is no certainty, even as polls 14 months ahead of next year's national election show Biden winning a hypothetical matchup with Trump. Biden has used his poll-leading status as his main campaign pitch for why he ought to be the nominee, a consensus choice, he says, to do the one thing Democrats most want: deny Trump a second four-year term.

But various surveys also show Sanders, Warren, Harris and Buttigieg defeating Trump as well, although not by as much as Biden.

"Four years of Donald Trump would be an aberration in American history," Biden likes to tell voters. "Eight years will fundamentally change who we are as a nation."

Gambling sites in the U.S. and abroad, however, have Warren as the favorite to eventually overtake Biden for the nomination.

Some Democrats view the 76-year-old Biden as too old to take on the nearly-as-old Trump, who is 73. Sanders is even older, 78, while Warren is 70. Biden's mostly center-left political views on a number of issues, such as on health care policy and get-along relations with opposition Republicans, are at odds with Democratic candidates like Warren, Sanders and party stalwarts who have adopted more progressive stances to shake up Washington.

Moreover, Biden has raised new worries with his at-times stumbling remarks on the campaign trail. He has acknowledged he is a "gaffe machine," with his misstatements piling up in recent weeks, magnified time and again by repeat showings on social media accounts.

Biden has told crowds he is delighted to be in their state, but named the wrong state. He misidentified where two mass shootings occurred in August, even though it was only a day after the mayhem unfolded, killing 31 people. He flubbed a line about how minority children can succeed in America, botched his conclusion about Trump changing the nation at the end of the July debate and added to the confusion by asking supporters to donate to his campaign at a non-existent web site.

Whether any of his lapses matters is an open question among political pundits in the U.S. Voters so far have not seemed to care, with Biden holding a steady lead in the polls. 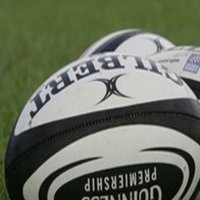 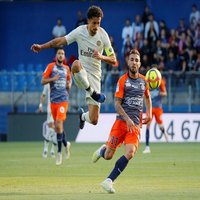 Virginia club welcomes President Trump for round of golf